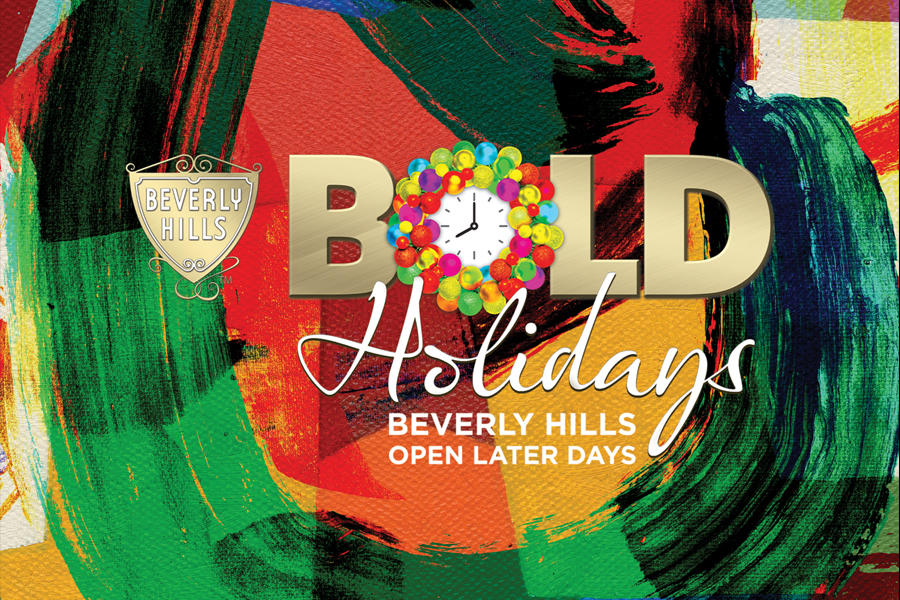 (BEVERLY HILLS, CA: October 23, 2019) — The third annual BOLD Holidays (Beverly Hills Open Later Days) invites residents and international visitors to Beverly Hills and its iconic palm-dotted Rodeo Drive to experience the magic of the holidays under the banner of a new and decidedly California-inspired visual identity designed by WRAPPED Studios and drawn from the work of its co-founder and renowned Los Angeles artist Chuck Arnoldi. Further spotlighting the City's commitment to art and visual culture, the first Beverly Hills interactive photography pop-up experience produced by The Scenario Studio, will set the scene for a picture perfect holiday season.

Presented by the City of Beverly Hills in partnership with the Beverly Hills Chamber of Commerce, the Beverly Hills Conference & Visitors Bureau and the Rodeo Drive Committee, BOLD Holidays 2019 will kick off with a captivating Holiday Lighting Celebration along Rodeo Drive on Thursday November 14, 2019 from 5–8 P.M. DJ CoryLive! will warm up the evening followed by Jazz ensemble The Cufflink Crooners, while contemporary and hip-hop dance numbers will thrill with holiday pop. Headlining this year’s extravaganza, Tony, Emmy and Golden Globe award-nominated TV actor and Broadway performer Matthew Morrison will take the stage for a special performance of holiday songs, along with a sneak peek from his upcoming 2020 album of Disney classic covers. The evening will be capped by Beverly Hills Mayor John Mirisch and fellow City Council members, who will illuminate the length of Rodeo Drive and its iconic palm trees with an abundance of sparkle before a dramatic and glittering grand finale of fireworks.

“On behalf of the City of Beverly Hills, considered the world’s most iconic luxury and fashion destination, we are excited to engage with artists and creatives to bring the holidays to life for our visitors from around the globe. This immersive new program of art and entertainment will enhance the magic of the holidays for all our visitors and for the international luxury brands who call Rodeo Drive home,” says Beverly Hills Mayor John Mirisch.

BOLD Holidays will continue across the City every Friday and Saturday from November 15 to December 21, 2019. Free and open to the public, this experiential engagement will feature a diverse range of programming - from impromptu music and acrobatics to dance at popular crosswalks of Rodeo Drive.

The Scenario Studio – a company that once catered exclusively to the private parties of celebrities such as John Legend, Chrissy Teigen, Katy Perry and the Kardashians among over 100 other A-listers, will have its first Beverly Hills pop-up located at 262 North Rodeo Drive. The public will be invited to experience a variety of professional photography sets designed by world-renowned photographer and set designer, John Ganun, complete with professional lighting, props and even some costumes. Throughout BOLD Holidays, guests will be invited to experience Ganun’s signature “Upside Down” room and a selection of scenes created specifically for BOLD Holidays. For more information and pop-up hours, please visit lovebeverlyhills.com/boldbh.

The BOLD Holidays festivities will continue across the city with stunning holiday light displays; entertainment aboard The Jolley Trolley with Mrs. Claus; curated art walks; family visits with Santa at The Paley Center for Media; and spectacular sculptural lighting installations. Adding some extra sparkle, a One World Wish Tree, installed in time for the grand lighting celebration, will invite guests to pen their holiday wishes while internationally acclaimed DJ Michelle Pesce will electrify the mood with custom playlists accompanying special performances taking place between Wilshire and Santa Monica Boulevards.

Information on how to contribute to a variety of charitable organizations can be found at the BOLD Information table located on Rodeo Drive during BOLD nights.

About Beverly Hills
Beverly Hills is one of the world’s most exclusive locales. Centrally located in greater Los Angeles, Beverly Hills is a premier holiday and business travel destination, with beautiful weather year-round, acclaimed full-service and boutique hotel accommodations, superb dining, and unparalleled shopping. Synonymous with Hollywood glamour, Beverly Hills enjoys an international reputation as the home and playground of A-list movie stars. The City is not only known worldwide for its grand mansions and chic shops along Rodeo Drive, but also for its multitude of art and architectural destinations, spas and salons, and exceptional walkability. Learn more at LoveBeverlyHills.com or on Facebook, Twitter and Instagram.

About Rodeo Drive
Rodeo Drive is an iconic, international luxury destination renowned as an unparalleled center for fashion and culture. Located in Beverly Hills, celebrated as the most glamorous city in the world, the famed palm-dotted three blocks of Rodeo Drive are home to more than 100 of the world’s most distinguished global brands, with buildings designed by notable names in design and architecture. Rodeo Drive hosts a vibrant program of tailored, annual events including BOLD Holidays, BOLD Summer and Rodeo Drive Concours d’Elegance, welcoming Southern California residents and international visitors to discover and enjoy exceptional savoir-faire, craftsmanship, and new experiences in fashion, contemporary art and culture. For more information about Rodeo Drive, please visit www.rodeodrive-bh.com and Instagram.

About Matthew Morrison
Matthew Morrison is a versatile actor who is recognized for his work on-stage and on-screen. He has been nominated for Tony, Emmy and Golden Globe Awards. Morrison’s career began on Broadway, where he was attached to major leading roles in productions such as Hairspray, The Light In The Piazza, and South Pacific.  His most recent Broadway credit is originating the role of “JM Barrie” in the hit musical Finding Neverland in 2015-2016.  In 2010, Morrison became a true household name when he was cast as a series regular in FOX’s musical comedy television series “Glee,” where he starred as the director of the glee club, “Mr. Schuester.”  The show was created by Ryan Murphy and received the Golden Globe award for “Best Television Series – Comedy or Musical” in 2010 and 2011.  Other notable television and film credits include What To Expect When You’re Expecting, Grey’s Anatomy, The Good Wife, and most recently, American Horror Story.  In June, 2013, Morrison released his latest studio album, “Where It All Began,” a Broadway standards record that was produced by the legendary Phil Ramone.  Prior to this album, Morrison released his debut, self-titled album through Mercury Records in 2011, which featured an A-list lineup of guest artists including Sting, Gwyneth Paltrow and Sir Elton John. Just recently announced, Morrison has teamed up with Disney Music Group to release a carefully curated album of Disney classics, set for release in early 2020.  The album, whose songs were personally picked from Morrison’s fondest Disney memories, will cover several eras of the classic films.

The Scenario Studio Hours
The Scenario Studio during BOLD Holidays will be located at 262 North Rodeo Drive and will be open to the public on Thursday, November 14, 2019 from 7:30–10 P.M. Thereafter through Sunday, December 22, 2019:

About WRAPPED Studios
The BOLD Holidays 2019 campaign is designed by WRAPPED Studios, a forward-facing artistic collective co-founded by world renowned Angeleno artist Chuck Arnoldi, Ryland Arnoldi and Sam Seidman. This intergenerational engagement reinforces the City’s nurturing relationship with the next generation of creatives working at the intersection of art, design and technology, and continues a long standing relationship that the City has developed with Chuck Arnoldi, whose cast bronze sculpture, Home, was commissioned by the City in 1992 and is still on public view on the northeast corner of Burton and Rexford, in Beverly Hills. Based in Venice, California, WRAPPED Studios creates innovative, technology-driven artwork rooted in traditional fine art techniques and has developed a digital-analog process that is used throughout its U.S. and international offices. From paintings, to experiential installations, to cutting edge digital art, WRAPPED Studios creates original art to fit and transform any space.

About J. Ben Bourgeois Productions, Inc.
The Annual Holiday Lighting Celebration on Rodeo Drive and BOLD Holidays 2019 twelve evenings of entertainment will be produced for the first time by J. Ben Bourgeois Productions, Inc. (JBB), LA’s leading event production firm, which is behind many notable art and cultural events and happenings including the openings of The Broad Museum, The Wallis Annenberg Center for the Performing Arts, LACMA’s Resnick Pavilion and BCAM and events for the Getty Center. JBB has been in business since 1991, when founder and president J. Ben Bourgeois started the company and quickly found himself amongst the premiere event producers in Los Angeles. From the start, JBB has offered experience, style and inventiveness, pairing elegant sophistication with event specific demands. JBB has been commissioned to produce events nationally and internationally to include in France, Italy, Japan, Mexico, Brazil, Morocco and Spain. JBB’s experience in LIVE event production ranges from award shows to premiere and launch events, sporting events to live concerts, and art and cultural galas and fundraisers.