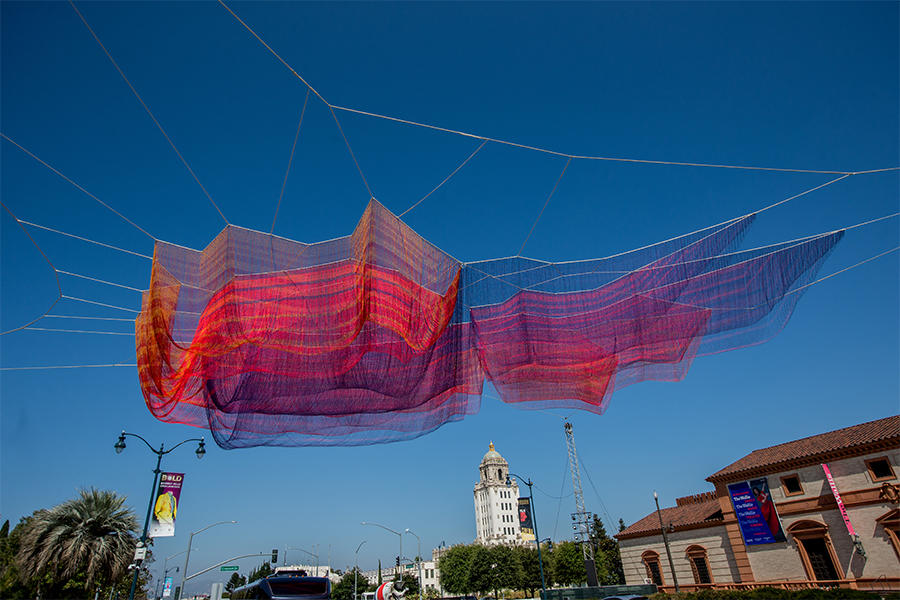 Spanning nearly 85 feet in length and suspended above North Santa Monica Boulevard between the Wallis Annenberg Center of Performing Arts and Beverly Gardens Park, Echelman’s piece, titled 1.78, will transform each minute with the changing wind and light. Inspired by fishing nets in India, Echelman combines ancient craft with modern technology to create fiber sculptures in vibrant colors. At night, the sculpture will light up the sky with specially designed LED lights.

Visitors will have an opportunity to hear the artist speak in person during the Janet Echelman Talk on Friday, August 2 beginning at 7 p.m. at The Paley Center for Media. Open to the public and free to attend, Echelman will speak about her experimental sculptures that have brought her recognition around the globe. Seating will be limited. 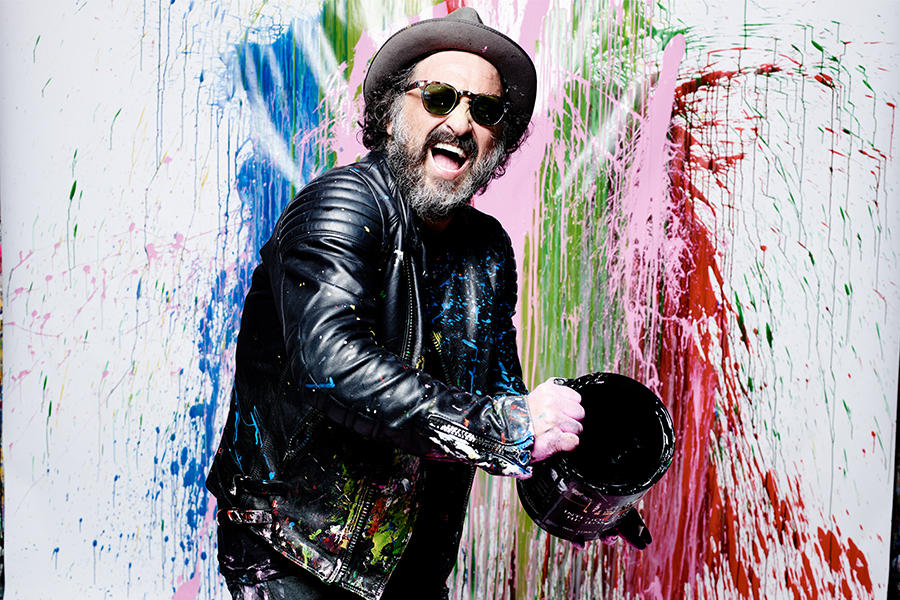 Known for his “Life is Beautiful” sculpture that debuted in 2008 on Sunset Boulevard, Mr. Brainwash has since become an international street art phenomenon after the release of 2010’s Banksy-directed film, Exit Through the Gift Shop.

This afternoon, at 5 p.m., Mr. Brainwash will be on 200 block of Rodeo Drive in which he will unveil a custom sculpture for BOLD Summer. At 6 p.m., he will be available for a public meet and greet opportunity. In addition to this special unveiling, he has also created two other sculptures which can be found in other city locations: The first, titled, “Beverly Hills is Beautiful,” is located in Beverly Canon Gardens, and the second, titled, “Beverly Hills is Life,” is placed outside of Wells Fargo on Santa Monica Boulevard at Camden Drive.

The official Rodeo Drive Kick-Off celebration this evening will be hosted by Sam Rubin and Jessica Holmes of KTLA’s Morning News, Southern California’s number one newscast. The music will begin at 5 p.m. featuring MISS DJ BLISS, followed by a dueling piano performance and an eclectic concert by Spanish opera and rock singer, Cristina Ramos, winner of Spain’s Got Talent. The evening will end with a fireworks show beginning at 8:30 p.m.

On August 24, the BOLD festivities will conclude with “Next Night-The BOLD Finale,” presented by the Next Beverly Hills Committee. The festivities will take place on the 200 block of South Beverly Drive from 6 p.m.-10 p.m. and include live entertainment, dancing, interactive art and a beer and wine garden.

All events taking place during BOLD Summer are free to attend and open to all ages. Attendees are welcome to join the social conversation on Instagram, Twitter and Facebook by sharing their favorite photos and experiences with the hashtag, #BOLDBH.

Known around the world for her installations that scale the size of buildings, Echelman’s work has been shown in a broad array of world-class cities such as Hong Kong, Dubai, Mexico City, Santiago, Boston, Sydney and London. Additionally, she has been the recipient of numerous awards including, most recently, the Smithsonian American Ingenuity Award in Visual Arts. To learn more, visit her website. A link to Echelman’s press kit can be found here.

Mr. Brainwash is the moniker of filmmaker and contemporary artist, Thierry Guetta. His installations on a large scale are admired at the international level. He represents cultural icons in his works and conveys an inspiring message. In addition to his signature, Mr. Brainwash has collaborated with the top names in the music industry, including Madonna and David Guetta. Mr. Brainwash, the subject of Banksy’s Academy Award nominated documentary, Exit Through The Gift Shop, is constantly in-step with the pop culture pulse: from creating an Olympic-sized art show in London in 2012, to collaborating with legendary Stan Lee during ComiKaze in Los Angeles, in addition to his yearly residencies at Art Basel, Mr. Brainwash remains a cultural phenomenon. A link to photos can be found here.