Beverly Hills Celebrates the Year of the Pig with Entertainment from Beijing, Tianjin and Hebei 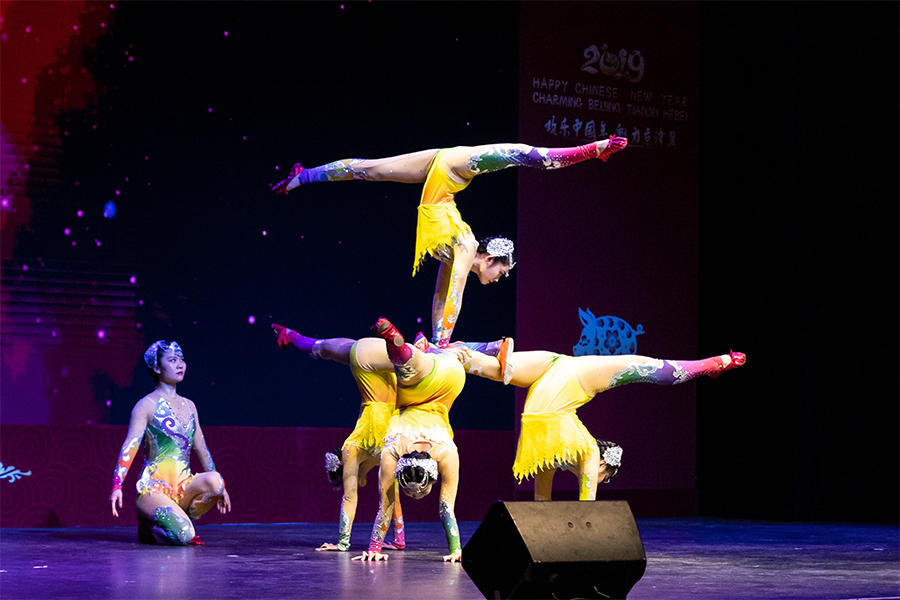 “We always look forward to this time of year when we pay special tribute to our Chinese friends,” says Mayor of Beverly Hills, Dr. Julian Gold, adding, “Beverly Hills loves the energy and vibrancy of the Chinese New Year celebration and each year seems to be more colorful and entertaining.”

China remains one of Beverly Hills’ top feeder markets and the city is committed to catering to its Chinese visitors. Many retailers have Mandarin speaking staff and some of the City’s hotels are offering overnight packages that include special amenities such as: a traditional Chinese breakfast, a Starline bus tour in Mandarin, in-room traditional Chinese tea setup and more.

“We are excited to bring new and exciting entertainment to Beverly Hills each year that showcases the spectacular talent and traditions steeped in history from China,” says Julie Wagner, CEO of BHCVB.

In addition to the variety show, a "Charming Jing-Jin-Ji" photo exhibition will be on display in the lobby for guests to experience that will introduce the Spring Festival culture, folk customs as well as economic and social development in Beijing, Tianjin and Hebei Province.

The variety show is curated by Director Rongqi Wang, famous for his work on major national cultural activities throughout China.

Tickets for the January 26 event are only $10 each; Ticketmaster fees apply. To purchase tickets, visit lovebeverlyhills.com/pig.

About Beverly Hills
Beverly Hills is one of the world’s most sought-after locales. Centrally located in greater Los Angeles, Beverly Hills is a premier holiday and business travel destination, with beautiful weather year-round, acclaimed full-service and boutique hotel accommodations, superb dining, and unrivalled shopping. Synonymous with Hollywood glamour, Beverly Hills enjoys an international reputation as the home and playground of A-list movie stars. The city is not only known worldwide for its grand mansions and chic shops along Rodeo Drive, but also for its multitude of art and architecture, spas and salons, and exceptional walkability. Learn more at www.lovebeverlyhills.com or on Facebook, Twitter and Instagram.

About Delta Air Lines
Delta Air Lines serves more than 180 million customers each year. In 2018, Delta was named to Fortune’s top 50 Most Admired Companies in addition to being named the most admired airline for the seventh time in eight years. Additionally, Delta has ranked No.1 in the Business Travel News Annual Airline survey for an unprecedented seven consecutive years. With an industry-leading global network, Delta and the Delta Connection carriers offer service to 302 destinations in 52 countries on six continents. Headquartered in Atlanta, Delta employs more than 80,000 employees worldwide and operates a mainline fleet of more than 800 aircraft. The airline is a founding member of the SkyTeam global alliance and participates in the industry’s leading transatlantic joint venture with Air France-KLM and Alitalia as well as a joint venture with Virgin Atlantic. Including its worldwide alliance partners, Delta offers customers more than 15,000 daily flights, with key hubs and markets including Amsterdam, Atlanta, Boston, Detroit, Los Angeles, Mexico City, Minneapolis/St. Paul, New York-JFK and LaGuardia, London-Heathrow, Paris-Charles de Gaulle, Salt Lake City, São Paulo, Seattle, Seoul, and Tokyo-Narita. Delta has invested billions of dollars in airport facilities, global products and services, and technology to enhance the customer experience in the air and on the ground. Additional information is available on the Delta News Hub, as well as delta.com, Twitter @DeltaNewsHub and Facebook.com/delta.

About STEFANO RICCI
Since 1972, STEFANO RICCI has been a reference point for true Luxury Menswear & Lifestyle. Known for its 100% Made in Italy craftsmanship, the Florentine maison offers the highest quality in made-to-measure Italian tailoring. It also embodies elegance with the SR HOME Collection and Bespoke Interiors, conveying the idea of living in a perfect equilibrium of pure lines, precious fabrics and timeless design, led by the search for excellence. Today, STEFANO RICCI is an ambassador of Italian style, not only in luxury menswear but also in quality of life. For more information, visit stefanoricci.com.