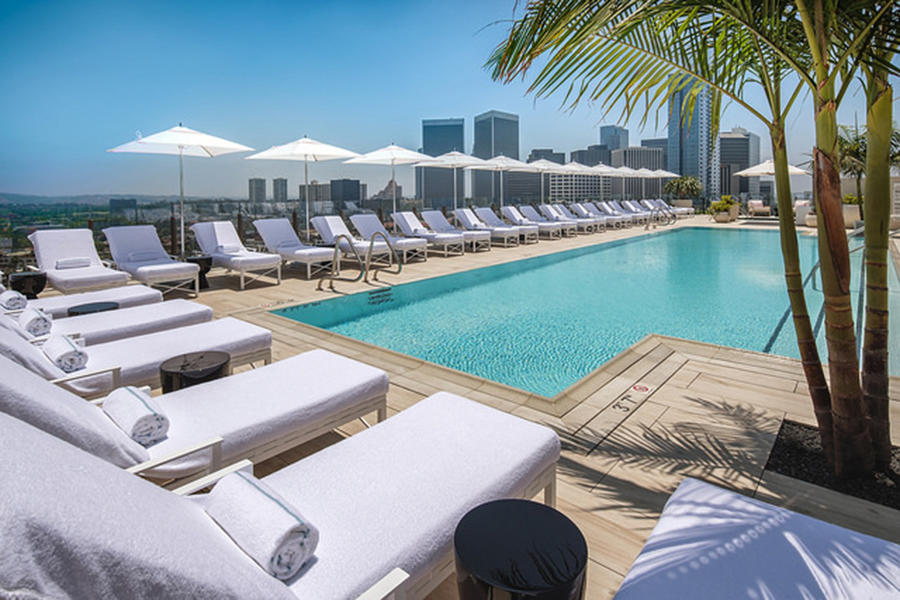 (BEVERLY HILLS, CA; FEBRUARY 26, 2018) - Beverly Hills Conference & Visitors Bureau is proud to announce the prestigious AAA Diamond Ratings and Forbes Travel Guide’s Star Ratings at nine of its hotel properties and one of its restaurant properties making Beverly Hills the city with the second-highest number of five-star hotels (6) after New York (7).

AAA announced its list of top hotels and restaurants in the U.S., Canada, Mexico and the Caribbean based on their well-known Diamond System. Properties who request an inspection must meet a 33-point qualification checklist just to be considered for a rating and are evaluated based on member feedback and the experiences of AAA’s professional evaluators, who arrive to the hotel unannounced. The inspection is broken into five categories including Cleanliness & Condition, Management Style of Operations, Exterior and Public Areas, Guest Rooms and Guest Bathrooms.

The Peninsula Beverly Hills - The only hotel in Beverly Hills to earn top ratings from both systems for over 25 consecutive years. The hotel offers 195 guest rooms, including 38 suites and 17 private villas, a rooftop pool surrounded by private cabanas, a tranquil spa, two full-service restaurants and a fleet of customized Mini Cooper S Clubman house cars. Tucked away on the hotel’s top floor, the Forbes Four- Star-rated Peninsula Spa offers innovative treatments, such as gemstone massages and facials using LED light therapy, as well as better-known experiences, including hot stone massages and reflexology. Having recently undergone a massive renovation, the hotel’s signature restaurant, The Belvedere, has once again earned the AAA Five-Diamond rating.

Viceroy L'Ermitage Beverly Hills - A Forbes Travel Guide Inspector calls Viceroy L’Ermitage Beverly Hills a “celebrity magnet,” likely due to the amount of privacy the hotel offers its guests. From an underground garage with a red carpet entrance to the hotel, guest room doorways tucked into corridors instead of the main hallways and the option to be escorted directly to their room, bypassing the front desk, guests seeking privacy have come to the right place. Perfectly situated near the city’s Golden Triangle, this Forbes Five-Star and AAA Four-Diamond hotel features the largest guest rooms in Beverly Hills, ranging from 650 to 3,700 square feet, and a heated rooftop pool which offers private cabanas and breathtaking views of the Hollywood sign and surrounding area.

Beverly Wilshire, A Four Seasons Hotel - Located at the base of Rodeo Drive sits the historic Beverly Wilshire, A Four Seasons Hotel. This Forbes Four-Star and AAA Four-Diamond hotel was once home to Warren Beatty and Elvis, who’s adoring fans would release balloons containing love notes up toward his terrace. The Spa at Beverly Wilshire received its second consecutive Forbes Five-Star rating this year, as a result of in its unique services, such as the Tension Reliever, which uses golf balls as a massage tool to soothe tension. Wolfgang Puck’s CUT Beverly Hills is located inside the hotel, which earned Four-Diamonds with AAA and Four-Stars with Forbes, while THE Blvd, serving local California fare with Mediterranean influences, earned a AAA Four-Diamond rating.

The Beverly Hilton - Since 1961, Hollywood’s elite have gathered inside the Forbes Four Star Beverly Hilton hotel for the annual Golden Globe awards. Of the hotel’s 569 guest rooms, 101 are suites which range from 500 to 1,100 square feet and feature a Bose Wave Music System. The hotel also boasts the largest heated hotel pool in Beverly Hills, which Angelina Jolie once jumped in to celebrate her Golden Globe win, while still wearing her Randolph Duke gown.

Spago Beverly Hills - A restaurant favorite for celebrities and locals alike, Spago Beverly Hills has been awarded a AAA Four-Diamond award and is the flagship restaurant of the Wolfgang Puck Fine Dining Group. Whether seated in the dining room, or on the romantic patio, you’re guaranteed to enjoy the restaurant’s à la carte menus with dishes such as Squid Ink Garganelli with Maine Lobster, A-5 Japanese Wagyu New York Steak and Pizza with House Cured Smoked Salmon. For fans of chef tasting menus, Spago’s California tasting menu changes seasonally and comes with the option to add a wine pairing to each course. Spago’s award winning wine program consists of 3,000 bottles, with The Los Angeles Times calling it the most important, most comprehensive and most extravagant wine list in Southern California.

About Beverly Hills
Beverly Hills is one of the world’s most sought-after locales. Centrally located in greater Los Angeles, Beverly Hills is a premier holiday and business travel destination, with beautiful weather year-round, acclaimed full-service and boutique hotel accommodations, superb dining, and unrivalled shopping. Synonymous with Hollywood glamour, Beverly Hills enjoys an international reputation as the home and playground of A-list movie stars. The city is not only known worldwide for its grand mansions and chic shops along Rodeo Drive, but also for its multitude of art and architecture, spas, salons and exceptional walkability. Learn more at www.lovebeverlyhills.com or on Facebook, Twitter and Instagram.